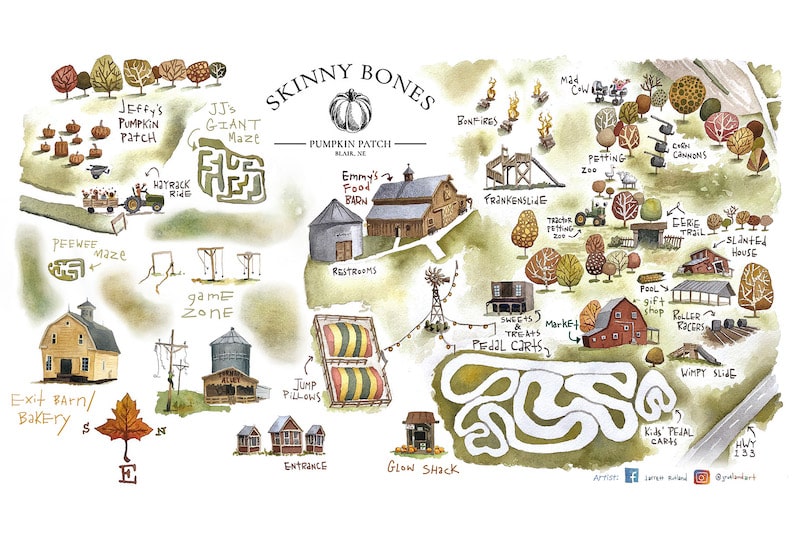 Skinny Bones is now accepting applications for the 2021 Fall season!

Click here to read our statement and policies regarding Covid-19. 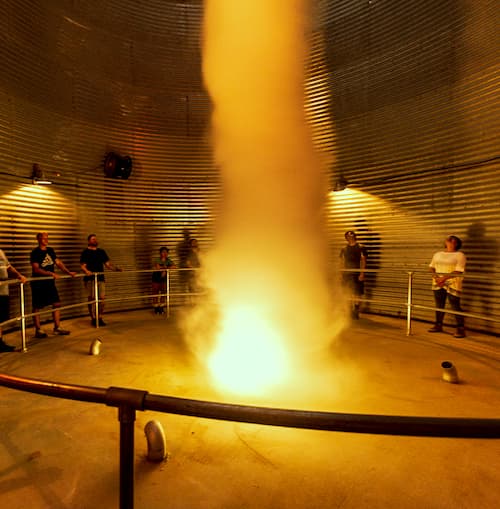 We are proud to present the nation's tallest indoor tornado simulator! Both an educational and visual experience that will surely grab your attention! 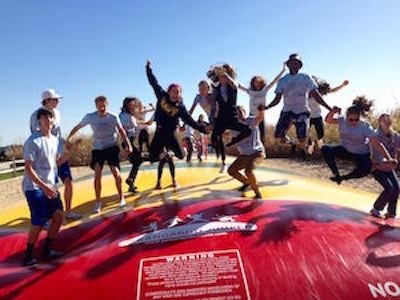 These pillows are “mammoths”, and kind of like a massive trampoline. Soar to new heights or let your kids release their endless energy on these family-friendly exercise pillows! 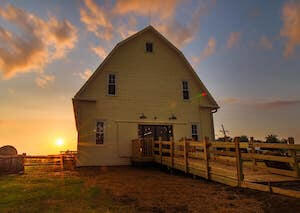 Newly added in 2020 is the Bakery Exit Barn. At over 120 years old, this barn is a historic treasure, and features our Skinny Bones apparel, souvenirs, and freshly baked goods! 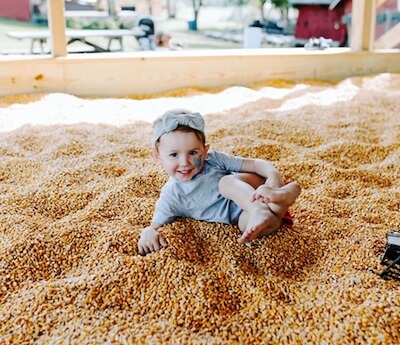 This “sandbox” of pure corn is the perfect place to hang out with your kids while they play away with trucks and shovels. Encourage your kids to pursue our Cornhusker heritage by exploring this pool of corn. 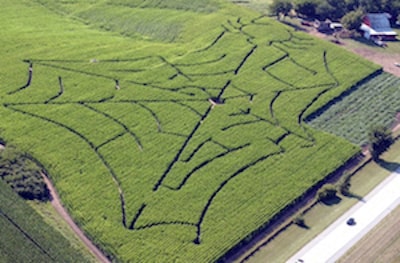 Skinny Bones' 10-acre corn maze is our most popular attraction. With twists and turns along the way, it will be hard to find your way! Challenge your friends to our scavenger hunt, grab your punch card, and search for the punch stations hidden throughout the maze. If you complete all, your master maze status leaves you with new bragging rights and a lucky prize!
Friday from 6PM-10PM is flashlight night. Navigate your way through the giant corn maze with the help of your flashlight!
Saturday from 6PM-10PM is haunted night in the corn maze! Enter if you dare! Scarers move through the giant corn maze, anxiously awaiting their next victim. No flashlights allowed. (The haunted corn maze is limited to 1 time per person). 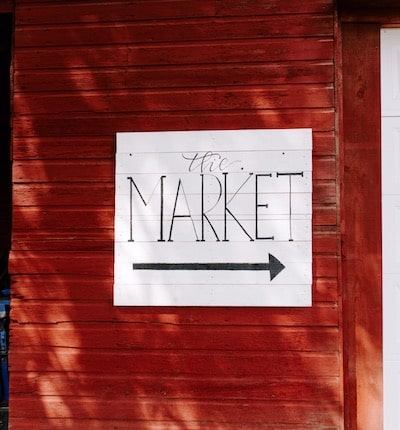 Shop in our vintage market with unique gifts and merchandise. Browse our large selection of Skinny Bones apparel and souvenirs, including sweatshirts, baseball hats, mugs, candles, and more! 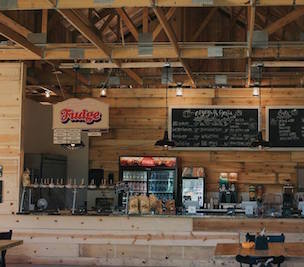 Sit back and relax in a picturesque barn while you taste some of our favorite fall foods! Turkey legs, barbeque pulled pork sandwiches, grilled burgers, and all beef hotdogs to name a few. Our signature items include our homemade kettle corn, hand-dipped carmel apples, and our homemade fudge made with fresh butter and cream! 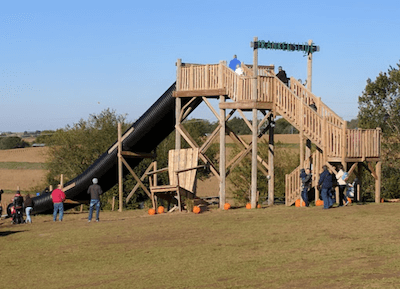 Dueling tower slides that are scary fast! Race your friends down 60 feet of darkness and see who reaches the end of the tunnel first. This attraction is a birthday party favorite and loads of fun for spectators to enjoy as well. 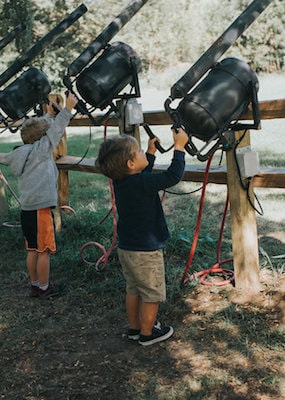 Test your skills at shooting the powerful cannon. If you're skilled enough to make it through one of the targets you win a small prize! This attraction is in loving memory of Jeff's father, Jack Edward Bledsoe. 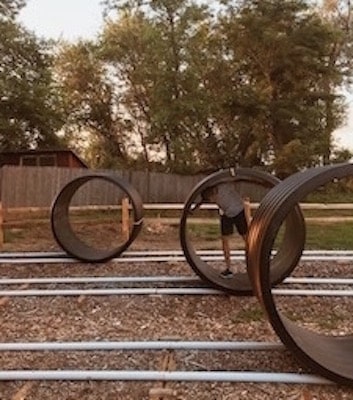 One of the biggest fascinations our children had is the way a “roly poly” (aka pill bug) can turn into a ball. Make your childhood dream’s come true by rolling into your own ball and racing your friends and family down the track. 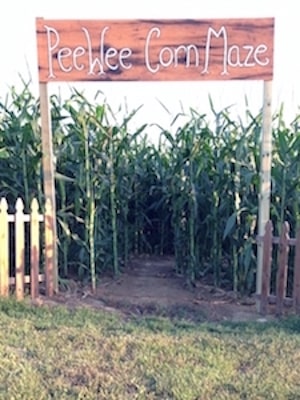 Don’t want to send your young ones venturing off into the large maze? No worries, we get it. Our "one path and you’re out maze" is a favorite with the little ones! 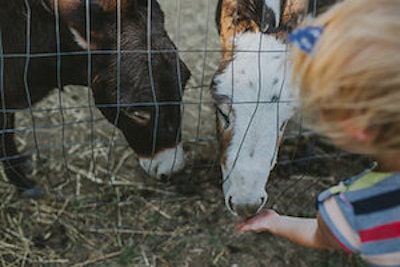 Nicknamed after our third daughter, this petting zoo is full of fuzzy and fluffy farm animals. Pet or feed them to your hearts desire and let your kids have a memorable, ‘hands on’ farm experience. 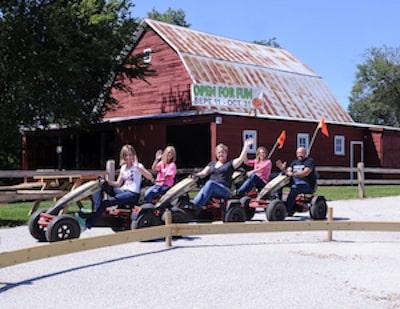 Eager for a little healthy competition? Jump aboard a pedal cart and challenge your family or friends to a lap or two around our speedway with twists and turns to maneuver. Karts are available for all ages with a separate track for the little ones. 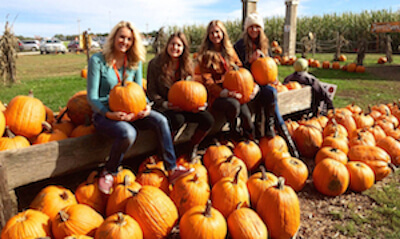 It’s nostalgic to see a patch where you can pick real pumpkins off of the vine. Skinny Bones owner, Jeff (we call him Jeffy), has been growing pumpkins since he was just about the size of…. well, a pumpkin. We believe that the backbone of our farm is the patch and we hope you think so too. 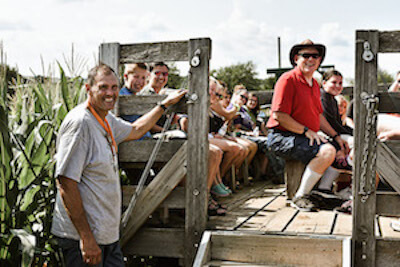 Take a break from the busyness of life! Experience fall with a hayrack ride that takes you out to the pumpkin patch. 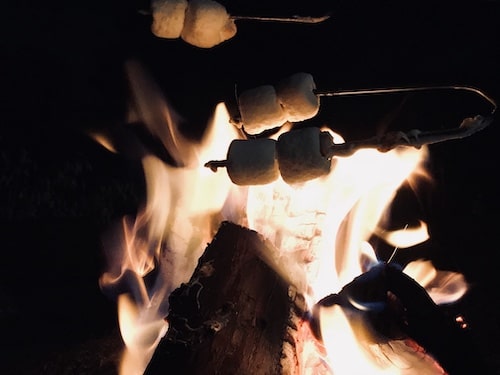 Rest with your group next to a nice fire, with two picnic tables provided! Available by reservation only, contact us to reserve a fire pit. Visit pricing for more information. 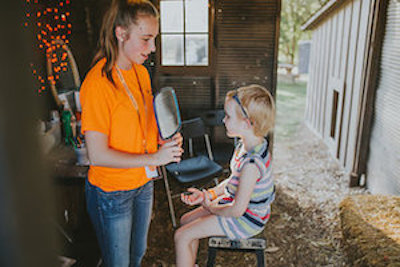 Our spooktacular face painters will put fun and creative designs on your little ghouls or goblins.

** Face painting has been temporarily stopped for the 2020 season due to Covid-19 safety guidelines. ** 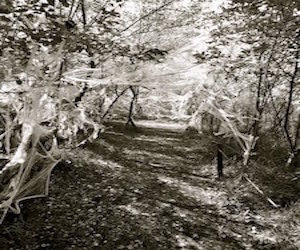 Ready for a wild adventure full of hair-raising excitement? The Eerie trail is a creepy fall journey, complete with unusual sights, scary surprises, and an optional “time-warping” trek through the vortex tunnel. Things may seem a bit out of place along this trail, but don’t worry you’ll be back in regular ole’ Nebraska once you’re through… 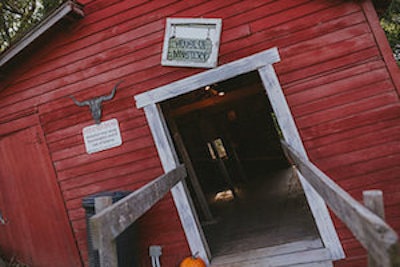 Legend has it that a tornado hit the farm in 1912 that never really left. Since then, it’s been contained in this retired machine shop. All becomes a mystery when you step into this slanted building. Try to keep a “level” head in here, as gravity may offset your balance. 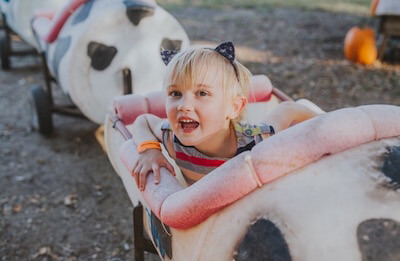 Let your kids hop on a cow cart and "moo" their way around the cow trail. The ride is suitable for small children up to 85lbs.

The safety of our guests and our staff is our first priority.

Masks at Skinny Bones are optional for our guests, however they are strongly encouraged especially when indoors or when it’s difficult to maintain 6-foot distance.

All of our staff will be recommended to wear masks, along with temperature checks prior to clocking in for their shifts.

We have increased cleaning schedules and hand sanitizing stations throughout the farm.

We value our guests and are forever grateful for your continued support of Skinny Bones and for playing safe.

Come enjoy the great outdoors, practice 6 feet social distancing, and create priceless memories for you and your family!

(Plus tax. Children 24 months and under free.)

Get unlimited entry for the season! Only $43.95 per person, plus tax.

$100 each and can last up to four hours! Reserved seating with two picnic tables and two benches, we supply the wood and our staff will start your fire. We recommend 25 people per fire pit. Fire pits are by reservation only, please visit our ticketing page to reserve a fire pit. For more information on specific time slots, please visit our ticketing page. There is a no refund policy, but your reservation may be switched to a different date permitting in our season, due to severe weather. There is a NO alcohol policy.

Friday from 6PM-10PM. Navigate your way through the giant corn maze with the help of your flashlight! Bring your own flashlight or buy one in our gift shop. This is a popular night for families!

Saturday from 6PM-10PM. Enter if you dare! Scarers move through the giant corn maze, anxiously awaiting their next victim. No flashlights allowed. (The haunted corn maze is limited to 1 time per person).

School groups, home school groups, or day cares, with 20 or more in their group pay just $8 per person (Discount for students and teachers only, plus tax) on Monday-Thursday with reservations. Field trips must be during school hours only from 9-3:00. School group admission rates only apply when student admission is being paid for by the school. Our passion is to educate children on Nebraska’s agriculture and each child will take home a free mini pumpkin! (While supplies last) Educational speakers are available upon request. Bring in your own sack lunches or purchase food at Emmy’s barn! Please contact us to reserve a field trip.

Fun and unique! Pay admission for each person to enter the gates. Birthday child gets a FREE mini pumpkin with reservation! We suggest renting a fire pit to have reserved seating. You may bring in your own food or drinks or let us cater for you! Our gift shop has a wide variety of unique toys and gifts for goodie bags, making it easier on parents for party planning.

Skinny Bones Pumpkin Patch is a wonderful setting to host all events and gatherings of any size. Groups of 100-199 people receive $1.00 off weekend admission. Let our staff help with event planning and several catered food options are available. Contact us for details!

How do you reserve a fire pit?

Fire pits are $100 and can last up to four hours! We include the wood, two picnic tables, and will light the fire for you. Please contact us in order to reserve your fire pit.

Is there food available?

Where are you located?

We are located 8 miles North of Omaha on Highway 133. (Half way between Omaha and Blair) Check the right side if you're coming from Blair, or the left side if coming from Omaha. To view a map, click here.

What all does admission include?

The admission prices include entry to over 30 attractions, unlimited times! (Food, gifts, and pumpkins are extra.)

What forms of payment do you accept?

Bring your entire family out for a fun day at the pumpkin patch!

Doggie admission ($10/each) will benefit the Nebraska Humane Society. General admission is $16.95 per person, plus tax (two and under are free).

No aggressive dogs permitted. All dogs must be on a leash at all times, and owners are required to pick up after your dog.

Omaha School of Music and Dance

Come trick or treating at the patch (admission required) and visit us on the last day of our season!

The idea for Skinny Bones Pumpkin Patch began with Jeff Bledsoe. As a boy growing up in LaVista, Nebraska, Jeff planted pumpkins in his parent’s backyard every year, always so proud of his largest pumpkin in his patch.

After purchasing some land for a rental property, off of Highway 133 in Blair, Nebraska, Jeff stated that one day it would become a pumpkin patch. Maria, his wife would laugh, logically thinking, but not surprised when he set up his old pick-up truck at the end of the driveway, pumpkins a plenty and kids at hand, helping wave down cars. Skinny Bones Pumpkin Patch was established officially in 2008.

Jeff, being the visionary of the business, is a true kid at heart. Running his own auto repair shop during the day allows him to use his mechanical skills and his creative side at night. Today there are several attractions that were built by Jeff that have a special meaning to the Bledsoe family. The windmill was one of Maria’s birthday presents, the stage was built for his daughter Courtney’s wedding, and Jack-O- Shooters was built in loving memory of his late father, Jack Edward Bledsoe.

Maria is always on the go, and she wouldn’t have it any other way. Being a busy homemaker of five children, she quickly accepted the role of managing the business end. She handles all of the purchasing, hiring, scheduling, and delegating. She loves interacting with customers, friends, and people in general.

Jeff and Maria’s five children each played a vital role in their family business. Concession stand workers, face painters, maze designers, were just a few roles in their younger years. Throughout the years, their roles have changed as they moved into their adult lives. Photography, drone video footage, website design, marketing, and business management are just a few of their God given gifts in which they use today.

This is our 11th year of running Skinny Bones and it has been a true adventure. We have watched our children grow and have gained priceless memories through Nebraska’s agriculture. We strive to maintain good old fashion fun for our future generations, and to add new and exciting attractions. We thank you for being part of our family’s adventure and we welcome you as our guests!